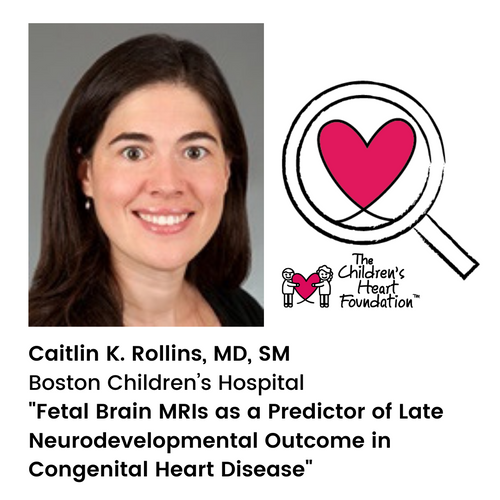 How might MRIs predict neurodevelopmental outcomes for babies with CHDs? This is a topic Caitlin K. Rollins, MD, SM, from Boston Children’s Hospital wants to explore through her study: Fetal Brain MRIs as a Predictor of Late Neurodevelopmental Outcome in Congenital Heart Disease.

Abnormal brain development in utero likely contributes to neurodevelopmental disability in children with CHDs. Even before surgery, the brains of babies with CHDs appear less mature than the brains of babies without CHDs. The fetal brain is organized into layers of tissue called the transient fetal brain compartments. These compartments generate neurons, create connections throughout the brain, and establish the organizational structure of the brain which persists long after birth. Cells in these compartments are particularly vulnerable to low oxygen levels. Since fetuses with CHDs often have low oxygen delivery to the brain, cells in the transient fetal brain compartments are at risk. Damage to these cells could impact long-term brain structure and function. The association between fetal brain health and long-term neurodevelopment in CHDs is a critical knowledge gap.

Beginning in 2014, Dr. Rollins and her group created a cohort of 147 children—some with and some without CHDs—who were enrolled in a fetal brain MRI study before birth. Their detailed database includes fetal brain MRI measurements, sociodemographic and medical data before and after birth, and two-year neurodevelopmental outcomes for each child. So far, Dr. Rollins and her team have demonstrated two key findings in our cohort.

It is not known whether the association between fetal brain size and early development is transient, or if abnormal fetal brain structure has lasting neurodevelopmental implications for these children.

With funding from The Children’s Heart Foundation, Dr. Rollins and her team will now complete the first long-term follow-up study of children with CHDs who underwent fetal brain MRIs. They will also acquire neuroimaging and neurodevelopmental data of these kids who are now school-age. Follow-up at school-age is critical, since this is when detailed neuropsychological evaluation is first possible, and when neuropsychological assessments can predict long-term functioning. In addition, the vast majority of brain growth has occurred by school-age, and connections in the brain are well established. For Dr. Rollins and her team, their overarching hypothesis is that abnormal fetal brain development is associated with long-term differences in brain structure and neurodevelopmental functioning in CHDs. If true, this hypothesis would suggest that fetal therapies to protect the brain could improve long-term outcomes.

The proposed study will be the first to evaluate whether fetal brain MRIs can predict long-term neurodevelopmental outcome in CHDs. This data is urgently needed to optimize ongoing trials of fetal therapies to protect the brain in babies with CHDs. Through this research, investigators will: 1. gain insight into mechanisms of neurodevelopmental impairment in CHDs, 2. identify the patients who are most at risk of adverse outcomes and appropriate for clinical trials of fetal neuroprotective therapy, and 3. establish early biomarkers of long-term outcome. This single-site study will provide critical proof of concept data as the basis for a larger multi-site study harnessing fetal brain MRI cohorts throughout existing pediatric cardiology networks.