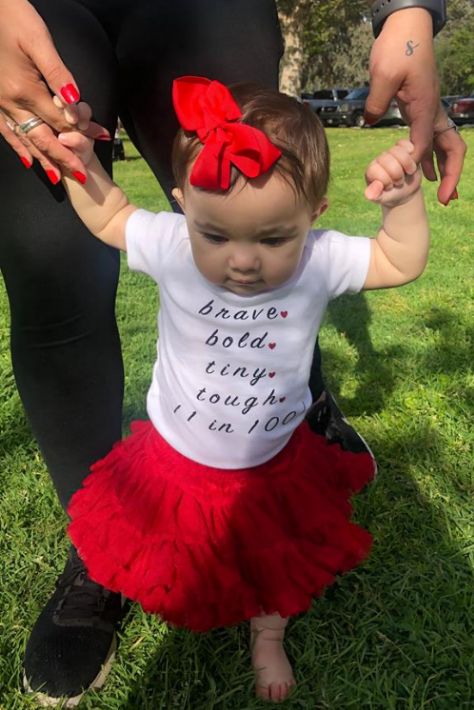 Sloan Eleana Allen-Leal was born on June 01, 2018 at 2:27 pm. I was so nervous. I’ve wanted to be a mom for as long as I could remember and my time was finally here! I had a gut feeling that something wasn’t right. When Sloan came out, her scream was very quiet and she was so blue, especially her hands. I remember telling the nurses “her hands are blue; her hands are blue” and they kept reassuring me that it was normal for newborns right now and that she’d pink up.

We had one hour alone with Sloan and then all 10 guests came up to meet her. Because I had GD, Sloan’s blood sugar was checked 3 times and all 3 times the results came back low. After everyone left, around 8:00 PM, they had to take Sloan to the NICU to give her some high caloric fluids to help her blood sugar level. By 12:00 AM we hadn’t heard much, so I sent Taylor to check on our baby girl. When he came back, I could immediately tell something was wrong. That gut feeling came right back. I asked what happened and he told me she was sedated and had all these wires and tubes on her now. I called the nurse in and said I wanted to see my baby, so she brought the wheel chair and wheeled me to the NICU. When I saw her I lost it. I didn’t understand what was happening and why it was happening this way, she only needed some fluids, nothing else. My nurse brought me back and told us to try to get some rest. But I couldn’t sleep. We still hadn’t heard anything about what was going on. Soon it was 2:00 am and then at 4:00 am the NICU Dr. finally came in.

He asked us if we knew anything and we both shook our heads no. He explained that she was sedated and had all these tubes and wires on her because she was fighting the staff and they needed to monitor her. He said a sentence NO PARENT WANTS TO HEAR. “I heard a heart murmur and I want to transfer her to Rady Children’s in San Diego.” [ Rady Children’s was an HOUR and A HALF away from us] At 7:00 am Sloan came back into our room with the transfer team in a plastic box with a ventilator and the wires and tubes on her. They explained to us how this works and had us sign what we needed to sign and she was on her way. Since I just had a c-section I couldn’t go with, so Taylor left and followed her down there.

June 02, 2018 Sloan was admitted to Rady Children’s and was diagnosed with Tetralogy of Fallot. Sloan needed a special medication called PGE to keep her PDA open for her to get enough oxygenated blood to her little lungs. I was finally able to get down to Rady’s on June 03, 2018. The nurses, soctors and staff were so amazing. They were able to fill me in on everything that was happening with Sloan. On June 04, 2018 I finally got to hold Sloan again. We were in the Hospital for 32 days. Sloan had her first Open Heart Surgery on June 26th, 2018. Handing over your 3-week-old to medical professionals is one of the hardest things we’ve ever had to do but, Dr Nigro was able to work on her WALNUT SIZED HEART and was able to replace her pulmonary valve, repair her hole, close her PDA, shave the thickened areas, and open her arteries. Sloan was able to recover in just 8 days after her Open-Heart Surgery! July 04, 2018 we were finally discharged from Rady Children’s.

We have been home for 8 months now. Since being home, Sloan has had a cath procedure to reopen her arteries & 5 echo’s (2 being sedated). We are scheduled for another sedated echo in June and we are monitoring her arteries and leaking of her pulmonary valve. Even though she still has blockage and leaking, you couldn’t tell just by looking at her. Sloan looks and acts like a normal 9-month-old. She is laughing, smiling, eating, crawling and now starting to pick herself up and walk along furniture.

This is not the start I thought we would have had with our first baby. Its been a very crazy start, to say the least, but we are handling it day by day. We are doing everything and anything in our power to make sure Sloan stays as healthy as she can be. 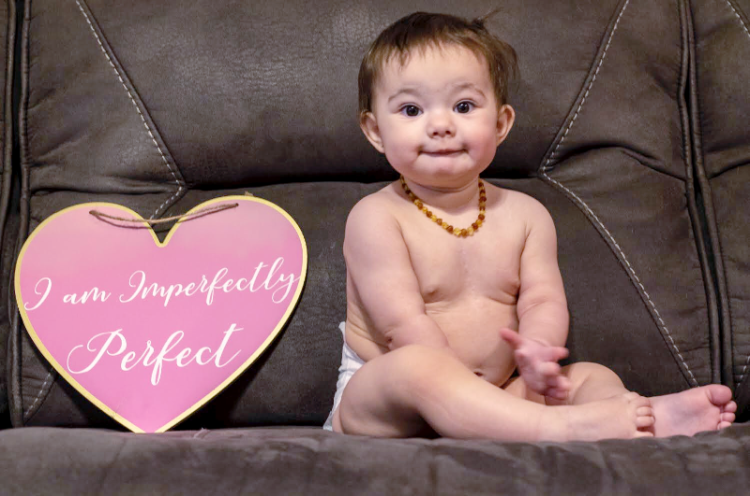