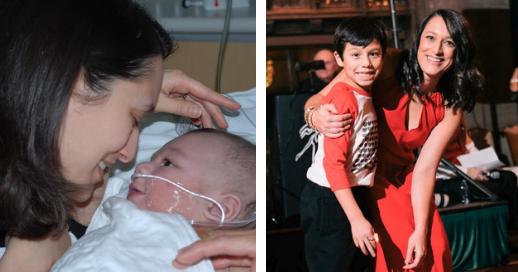 Twenty weeks into our pregnancy, we were devastated to find out that our son would be born with a severe congenital heart defect known as Tricuspid Atresia with an associated Hypoplastic Right Ventricle. We were told that Noah would need at least 3 open heart surgeries in his first few years of life in order to palliate his heart defect and maximize his life expectancy, but nothing could ever cure his condition. And, there was no telling how successful each procedure would be or if he would need other interventions along the way. With the help of family, friends, and other CHD families, we remained strong, did our research, and prepared for Noah’s arrival.

Noah was born on August 21st, 2008 at a whopping 8 pounds 11 ounces – bigger and pinker than anyone expected!! After a few days in the NICU we were able to take him home, but then found ourselves back in the hospital when he was just over a week old due to his dropping oxygen levels. As long as Noah was fed every 3 hours, he didn’t mind undergoing blood work and other tests, as his doctors waited for the perfect time to perform his surgery. When he was just 2 weeks old, Noah underwent his first surgery, the B-T shunt. Surgery went remarkably well, and while Noah’s recovery was complicated by some stomach issues, he finally went home 3 weeks after his surgery.

Noah thrived at home and enjoyed his first Holiday season. Things were far from "normal" though. We were very cautious about exposing him to to anyone who was sick, as we knew a simple cold could land him back in the hospital. At 5 months of age, Noah underwent his 2nd open heart surgery, the bidirectional Glenn. This was supposed to be the easiest of the 3 surgeries to recover from and we had hoped to be at home in 1 week.  Unfortunately, a week after surgery, we discovered that Noah had developed a massive chest infection called mediastinitis due to a bacteria known as MRSA. In other words, he had a huge collection of pus surrounding his heart, splitting apart his breastbone. The treatment for this involved a couple more surgeries to clean out the infection, keeping his chest open for a few days while the infection started clearing, and complete sedation and paralysis for 7 days. It was as if the life had been sucked out of our little Noah. Looking back now, it was probably one of the toughest times we’ve gone through. Slowly, but surely, the antibiotics started working and we made it home three and a half weeks later. The recovery continued there with 9 medications, 1 through an IV every 6 hours, and a feeding tube in his nose. It took a good 3 to 4 more weeks before Noah readjusted to being home and started tolerating his bottles again. Finally, around 8 months of age, the antibiotics were stopped and Noah was left with just his 3 cardiac medications to take on a daily basis. It was then that we finally started taking Noah out to explore the world beyond the walls of our own home.

The next few years were wonderful and Noah even earned the title of "big brother" when we welcomed Caden into the world in 2012. In May of 2012, Noah had his 3rd open heart surgery. While it was frightening to be back in the hospital, he sailed through the surgery and recovery and was able to return home in just 8 days!

Today, Noah is a thriving 10 year old, living a full life with just half a heart!! He is an active 4th grade student who loves baseball, golf and basketball, all foods that are spicy, playing with his brother, and spending time with family.

While Noah’s future is uncertain, we know that 20 to 30 years ago, we wouldn’t have had even this much time with him. Through research funded by organizations like The Children’s Heart Foundation, physicians have made great strides in the treatment and prevention of congenital heart disease. 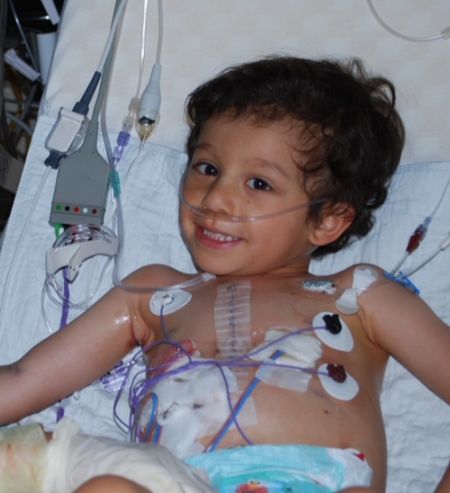