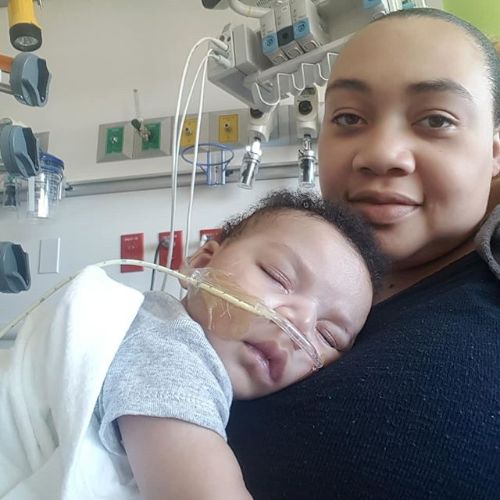 We decided to wait a few years before trying again after having my oldest. We were excited to get started on our family of 5 goal. I found out I was pregnant in August of 2013. My husband and I were excited. We told everyone. Not even two weeks later I began spotting. I went into my doctor's office. They did the ultrasound and my world came crumbling down. My husband is a strong man. He told me not to worry. That we would still have our chance. He was right a few months later in February of 2014 I found out I was pregnant again. We had our son Marik on October 3rd. Ironic now that he was born during infant loss awareness month. We were ecstatic and overjoyed. A family of four. Two beautiful boys. We had the best four months of our lives. We had moved into a new home. I had gotten promoted to a great position at work. Things were going so great.

On February 8th, 2015, I woke up in a nightmare. I went to feed my son Marik and found him eternally sleeping. My rainbow baby had gone to be with the Lord. My husband and I were devastated. Had it not been for our oldest son still needing us to be his parents, I don't know how we would have made it. I remember Markus' speech at the memorial service. He closed it with saying to all of our family and friends by saying "well I guess we have to get busy working on another one". That small joke to cut the thick cloud of sadness in the room was needed. In April of 2015, I was celebrating my oldest son's birthday. I didn't feel right. I checked and my husband had kept his word. I was pregnant again. We had our 3rd son in December of that year. Still grieving the loss of our son Marik the entire pregnancy. Marin my 3rd son was a light that we all needed. We settled into our new normal. I had been promoted again at work. My husband had also gotten promoted. Things were seemingly getting a little better. I'm pregnant again. I scheduled my first appointment right away. At that appointment, they didn't see a heartbeat.

I had to hear those dreaded words again. This time I was angry. I felt beat down. I felt like I was being tortured. I kept a brave face in front of family and friends. I heard the whispers that I had nothing to be so devastated about. I had two healthy boys at home and shouldn't be so upset. I heard the whispers that I needed to get over my grief because I at least got 4 months with my son Marik.

I was tired of hearing those whispers. My husband was still walking around completely depressed and still suffering from the loss of our son Marik and the miscarriages. We decided to pack up our lives and move to Florida. We arrived in February of 2018. It was the best decision we could make. Even my oldest son seemed to be getting better. He was suffering from the loss as well. We just didn't recognize the signs until we were no longer in that depressed environment. Things were bright in the Sunshine State for us. So bright that we were pregnant again with our warrior Myrik. I found out in March 2018 that I was pregnant. This was our last pregnancy as I am in my late 30s. I remember wanting this to be a memorable pregnancy. I was planning to do all the things I didn't get to do with my first few pregnancies.

If you've made it this far in our story, I thank you. My family and I have been through a lot. We are a tough bunch. I guess you could say we were made for the heart life. Because we had gone through so much already, it was with no hesitation we decided to continue with my pregnancy after getting Myrik's diagnoses.

Myrik was born December 1st, 2018 and has already been through so much.  He has hypoplastic left heart syndrome, which basically means he was born with half a heart. It is not curable. He can have a sustainable life with surgical intervention and meds. The current life expectancy of a person with this disease is mid-30s without a heart transplant. His life expectancy is unknown without intervention. He will have three open heart surgeries before he is the age of four years old. He has had his first surgery already. He is due to have his second surgery in a few days. Myrik has spent his first few weeks of life inside the Cardiac Intensive Care Unit (CICU). He is on a handful of medicines which I'm told he will go home with. He takes captopril for hypertension, lasix for a diuretic, heparin which is a blood thinner, and digoxin which helps his heart function. My new purpose as his mother is to raise awareness about this very common disease and make sure my boy lives a long and happy life. My son was fortunate enough to have been diagnosed in utero. Some heart warriors don't make it because it was not detected in time. I thank God his was seen early and we were able to get placed in the care of this great team of medical staff.