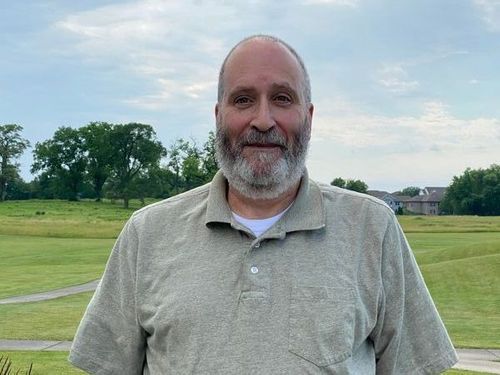 When Mick Landauer was born with a congenital heart defect in Davenport, Iowa, he shares, “The doctors told my parents, ‘Your child is going to die.’”

Today, at 63, Mick wants CHD families to know there is hope. He is proof of that.

Termed a “blue baby,” Mick was given a zero percent survival rate by doctors in his hometown, and the situation seemed hopeless since hospitals weren’t as connected or collaborative then as they are now. Refusing to give up, Mick’s parents contacted Mick’s great uncle, who was a doctor in Chicago.

“He didn’t know anything about CHDs,” admits Mick, “but he quickly asked around and learned there were three doctors in the country doing heart surgeries on babies…and one of them was at Children’s Memorial Hospital in Chicago.”

Three weeks and an ambulatory airplane ride later, Mick was under the care of cardiologist Dr. Robert Miller and pediatric surgeons Dr. Farouk Idriss, and Dr. Willis Potts. The team completed a Potts shunt, which was a cutting-edge procedure at the time.

Since he was only a few weeks old when the surgery happened, Mick has no memories of this time in his life. And even as he grew older, his parents failed to talk with him about the procedure or his heart condition.

“Doctors told my parents not to tell me anything unless I asked,” recalls Mick. “They were told to let me initiate the questions…but I was just a child, and I didn’t really know what to ask.”

For most of Mick’s childhood, he says, “I tried being a normal child and doing everything other kids were doing. I even wrestled in junior high…though I wasn’t very good at it.”

Mick’s parents didn’t allow him to play sports in high school, though he did participate in a regular gym class. “I remember when we had to run a 600-yard dash in the Presidential Fitness Test,” he shares. “It was a struggle, but I made it…and I felt so proud I didn’t finish last.”

In the midst of high school, Mick’s doctors told his parents that children who had received the Potts procedure were realizing complications. Dr. Miller and the team suggested a second surgery for Mick when he was 16 years old.

Mick was once again under the care of Dr. Miller, who had left Children’s Memorial for a position at Cook County Children’s Hospital in Chicago. Mick’s surgeon this time was
Dr. Constantine "Dino" Tatooles, Cook County’s chief of surgery, who completed the Glenn procedure, in which they connected Mick’s superior vena cava directly to his lungs.

“My doctor called it a modified Fontan, and now they call it the hemi-Fontan,” explains Mick. “I remember my doctor telling me about the rarity of my situation—that I was only the third person in the United States, and only the fifth in the world—to have this groundbreaking procedure. They reversed the first surgery so they could perform the second surgery.”

Except for nicking Mick’s vocal cords in the process (resulting in a slight rasp to this day), the procedure was a success. Perhaps the hardest part was the recovery time: 10 days in the Intensive Care Unit.

“My mother told me I was allowed to be awake for only an hour each day,” Mick shares. Unable to talk, he was given a pen and paper to communicate with doctors, nurses, and his family. “My mom said the nurses were all commenting that I was writing very badly, and the doctors commented that perhaps it was another result from the surgery…but then my mother realized they were putting the pen in my left hand, and I was right handed!”

Not long after that, Mick said the doctors told his parents they could likely care for him as well from home. He was released directly from Cook County’s ICU with only butterfly bandages fastening his incision.

“It was a long summer,” remembers Mick.

But by the next summer, 17-year-old Mick and a friend were road tripping to Colorado following their high school graduation.

This was the beginning of a new journey, and Mick would make every moment count.