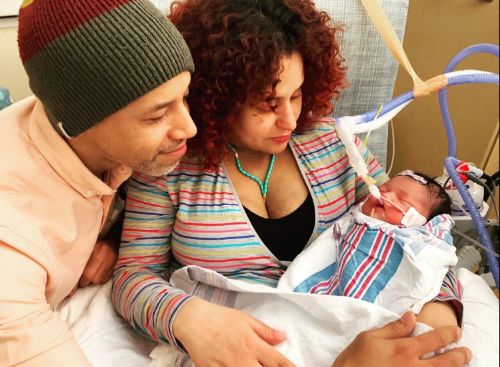 My daughter Luna Celeste was born on January 28, 2019. My third child. I have a 13-year-old daughter and a 5-year-old son. While pregnant with Luna I had the worst morning sickness, the worst out of all my pregnancies. I would joke and say, "wow, she has to have some sort of superpower, the way she's kicking my butt - she has to be something special."

And she was just that - one of a kind. Luna was born with a very rare congenital heart defect called Coronary Ostial Atresia. From what the cardiologists who diagnosed her tell me, her condition has never been seen before. Luna's left coronary artery was non-existent and her right coronary artery formed on the heart itself. There was no opening or attachment from the aortic artery to her coronary arteries. Therefore, she wasn't pumping any oxygenated blood to her heart.

My pregnancy was normal. Besides having to schedule extra sonograms to monitor Luna's growth because my umbilical cord was slightly off centered on my placenta –but this wasn't something to worry about. At my 20 week scan, everything checked out as normal. Her heart rate was normal, she was gaining weight, and all of her organs where forming properly. Nothing seemed to be a concern.

The rest of my pregnancy went smoothly and we were all awaiting her arrival.

On delivery day, everything seemed fine. They prepped me for my c-section and everything was going well. I was a little nervous about getting the spinal and was having a little bit of anxiety, but I knew it was just nerves. They began surgery, and as soon as the umbilical cord was cut, it felt like an out-of-body experience. The room went silent. I remember telling my husband, "Go check on the baby," but, he sat there frozen, almost as if he knew something wasn’t right. A couple of minutes passed, but it felt like hours to me when he finally got up to check on Luna. At this point, I couldn't see anything. I hadn't heard Luna cry yet. I started to feel anxious again and then finally, she let out 3 soft cries and I felt a sense of relief. That would be the one and only time I would ever hear her cry.

When the nurses were finished weighing her and getting her vitals, the pediatrician approached me. I was still laying on the operating table when she said, "Your baby has to go to the NICU and she'll probably be there until you’re discharged." I asked what was wrong, but all she said was that Luna had to be monitored.

I was taken to the recovery room. My first meeting with Luna was emotional. I saw her in an incubator and immediately broke down. I couldn't hold, kiss, or bond with her as I wanted. I felt so helpless. The neonatologist told us that he thought Luna's lungs were having a hard time transitioning and that he would be administering medication through an IV while they continue to observe her.

We left her in the NICU and I was brought to my room (not by choice). I remember time passing by really slowly. I was getting concerned that the doctor hadn't given us an update yet on how Luna was progressing, so I sent my husband back to the NICU to check on her. He came back and told us that the doctor would be coming up shortly to let us know Luna's status.

When the doctor walked in, I knew right away that something wasn't right. He had a certain energy about him. He told us that Luna had an issue with her heart and that she was in critical but stable condition and that she would have to be transferred to a different hospital where a team of neonatal cardiologists would be treating her. I was in so much shock that the word "critical" just flew over my head; I didn't really comprehend the severity of her condition.

I was allowed to see her while she was being prepped for her transfer. She had been intubated and on a breathing machine with an IV placed directly through her belly button. It wasn’t until then that the nurses let me hold her for the first time. I kissed her and told her how much I loved her and that she was going to be OK.

They transferred her to Morgan Stanley Children’s Hospital- New York Presbyterian. My mother and husband met her there while my mother-in-law and I stayed back at the hospital so I could recover. When Luna arrived at New York Presbyterian, they told my husband that Luna had an issue with her coronary arteries and that they would have to do a catheterization of her heart in the morning in order to get better images. This was because the fetal echo was showing some sort of blockage and not allowing proper blood flow to her heart.

I didn't sleep that night. All I did was pray. I prayed so hard.

I remember asking God to protect my little girl and to keep her strong. To give me strength so that I could be with her. It was torture having to be away from her and not knowing what was wrong. I had so much hope that things would be fine.

The next day, my OBGYN told me I was being discharged. She had received a call from New York Presbyterian saying they needed me to be there to help make decisions for Luna. I had just had a c-section 24 hours earlier, and by the grace of God, I was strong enough to get up and walk around. I honestly didn’t even think about the pain.

When I arrived at the hospital, Luna was still getting her catheterization done, so in the meantime, I met all of her amazing nurses. Luna returned from the procedure and there was a team of doctors there to discuss her results. We were all seated in a room. Myself, my husband, my mother, and both my mother and father-in-law. They told us that Luna had a very rare and severe congenital heart defect called Coronary Ostial Atresia which meant that her coronary arteries didn't form properly in utero and there wasn't any oxygenated blood pumping to her heart. She didn't have a left coronary artery and the right coronary artery that was present had formed on the heart itself and was too weak for reconstructive surgery to be done. The only option for survival would be a heart transplant.

When I heard "heart transplant" I felt the floor underneath me drop as if I was in a dream. They went over our options for keeping Luna alive and we discussed putting her on ECMO. Although I felt that this procedure was so invasive, we agreed that this is what we would do to keep her safe while she waited for a heart.

That night, we were able to hold her when the night shift team came in. This would be my second time ever holding her. It was a process moving her since she was hooked up to the breathing machine, the pulse OX monitor, the feeding tube, and the IV's. It took 4 nurses to finally place her in my arms. We showed her an abundance amount of love. We were so grateful for that moment. I held her for about an hour and a half. Around 11:00 pm, I handed her back to the nurse. My husband and I were sitting beside her discussing the ECMO procedure with one of the doctors when all of a sudden the nurse started to move in a panic.

I immediately knew something was wrong. I was watching as her numbers on the monitors decreased. I felt like I was in a movie. Her blood pressure had dropped and Luna went into cardiac arrest. I lost it.

All I wanted to do was scream, but couldn't for fear of popping my c-section incision. My mom had to escort me out of the room while the doctors and nurses worked on Luna.

40 minutes later, the doctor confirmed that Luna wasn't breathing on her own and that her heart was no longer beating. With all of the oxygen lost to her brain, ECMO was no longer an option. We had to say goodbye.

This ended up being the first time we got to hold her without any of the wires in the way. I placed her on my chest and felt the warmth of her body on mine. I didn't want to let her go. How was this happening? Why was this happening? It was all so surreal.

We had our private time with her and created a memory box and made molds of her hands and feet.

Leaving the hospital without my daughter felt like I was abandoning her.

I will never forget that feeling of emptiness.

It felt as if I were suffocating. I had lost a part of my soul. All of the expectations we had were gone.

Before Luna’s birth, I didn’t know what a congenital heart defect (CHD) was. I started to research on my own and was blown away when I found out that CHDs are the #1 birth defect in the United States. In honor of Luna, my husband and I created 4Luna’s Heart Inc., a non-profit to help raise awareness for congenital heart disease and to provide support, comfort, and healing to families suffering from infant loss.

We will be walking at the 2019 New York City Congenital Heart Walk to honor my daughter and all other CHD angels and warriors fighting their battles. Being that Luna’s condition was so rare, I’m compelled to bring awareness and share her story with the hope that in the future, through research, her diagnosis may have a different outcome. This is why I believe that The Children’s Heart Foundation's dedication to funding research is important and can be life-changing.

In the last couple of months, I've grown as a human in ways that I never thought were possible. Life put me in an unimaginable situation where I thought I wouldn't survive, but surviving is my only option. I've learned a lot about who I really am and what I'm capable of.

Going through this grieving process has been heavy. It’s been a roller coaster of emotions; from being angry to feeling completely defeated, feeling confused and trying to find understanding, to being positive and finding strength by turning pain into power. Grief looks different for everyone, and I can only take it day by day. Even sometimes moment to moment. It’s about feeling what I feel, releasing it, and then bringing myself back so I can be present for myself and my family.

Luna blessed us with 2 beautiful days where she came and fulfilled her purpose. She touched so many of us and she will be forever loved. She’s our angel now.

Until the day we meet again, we will forever hold her in our hearts.