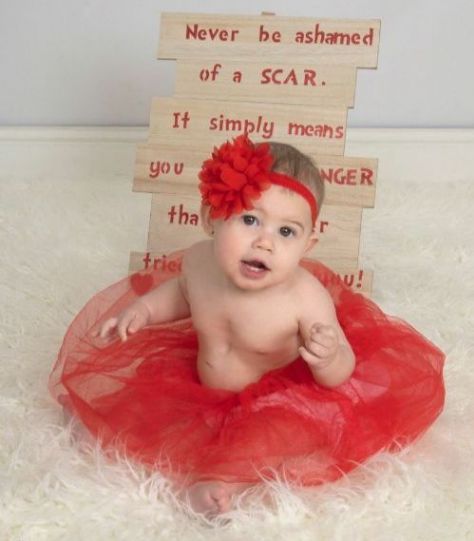 My OB would tell me how ‘boring’ my appointments were for him because my pregnancy was textbook perfection. I only had one ultrasound at 17 weeks, gained the appropriate amount of weight, and took my prenatal vitamins religiously. The last 3 months of my pregnancy my iron levels dropped and I began taking iron supplements since I was having a repeat c-section scheduled.

Gianna’s birth day came and I was overjoyed and nervous to meet my baby girl. I checked into the hospital, as I had planned to do, and was hooked up to the heart monitor and was completing all of my pre-opt stuff when the nurse came into my room and said that my surgery was going to be postponed due to an emergency c-section to deliver twin preemies. Just as the nurse was explaining this to us, I had a contraction and my baby’s heart rate dropped. Almost immediately, the room filled up with nurses trying to get my baby’s heart rate back up. I looked to my side and saw my husband staring at me, not know what was happening, as the nurses put an oxygen mask over my face. I was scared.

I thought to myself, “She wants out. We are either going ahead with the c-section or I’m going into labor.” My baby girl wasn’t feeling safe inside me, and that’s the worst feeling. Just then, her heart stabilized and everything returned to normal, putting us back on schedule for the c-section, which went fine.

Finally, it was time to go home with our beautiful baby and start our life as a family of four! Almost.

The nurse came into my room and told me that the doctor had heard a slight murmur in Gianna’s heart and ordered an echocardiogram as a precautionary measure. Already having gone through this when I was pregnant with my son, I was ok with it and had no worries. When the nurse returned, they told me that they had seen something on the echo so they were going to send it to Children’s Hospital for the cardiologist to read. Again, I wasn’t worried. After all, my son was born with a small hole in his heart that closed up on its own before he was even 6 months old.

Not long after, the phone rang and the cardiologist explained to me that my baby girl had 2 holes in her heart. The first one was small and should close up on its own, and the second hole was medium/large and might close on its own, but I would need to have a follow-up with a cardiologist in a week.

The cardiologist also cautioned us and said that if in the meantime we saw any signs of heavy breathing, lack of interest in food, sweating, lack of energy, or a bluish tint to Gianna’s skin, that we should bring her in immediately, as that could be a sign of cardiac arrest.

As I left the hospital, I was nervous that my baby was going to have a major problem and found myself wondering why they would send her home, but I figured all newborns must have those signs.

The next day we had a checkup with our pediatrician, who helped us understand the signs to look out for and referred us to a wonderful cardiologist. We met with the cardiologist and she did a repeat echo, which came back with the same findings as the first one. I took Gianna to weekly weight checks and biweekly cardiologist appointments and both my husband and my mom did their best to accompany me. Gianna was gaining weight and her next echo showed signs of her body trying to squeeze the hole shut.

By the time she was a month old, she was below weight and had trouble gaining more. We had just gotten to the zoo, my 4-year-old couldn’t wait to show his baby sister all of the animals. Just then, my phone rang and it was the cardiologist office wanting to see Gianna right away. I got nervous and upset, tears running down my face, as I left my husband and son at the zoo to bring Gianna to the cardiologist. I was sad for my 4-year-old and that his family fun day had to end, and I was scared and nervous for my baby Gianna.

When I got to the cardiologist, they told me that Gianna’s body was burning off too many calories. To help her gain weight, they put her on a 24 calorie diet and also decided to start her on Lasix and Aldactone. We continued our weight checks, and she would gain a little, but nothing substantial. My husband joined me Gianna’s next cardiology appointment where they did another echo and the cardiologist stated that the left side of Gianna’s heart was slightly enlarged, due to the blood flow. The cardiologist wanted to send her records to the surgeon at UofM, so my husband and I tried our best to hold it together in the doctor's office. The minute we got in the car our emotions caught up to us.

But she’s only 3 months old. How did this happen?

Like any mom, I started to replay my pregnancy, wondering what I had done wrong. Was I under too much stress with the move 2 weeks before my due date? But I now know that there was nothing that could have prevented this. I had to tell my mom the news and she tried to stay strong for me, but Gianna’s her granddaughter, so she couldn’t keep it together either. The next week was the most stressful, just waiting to hear from the surgeon.

My phone rang and it was the nurse from the surgeon's office; as my heart was racing. The nurse proceeded to tell me that Gianna would be scheduled for surgery and that it would happen in a week and a half.

I was on my lunch break at work and couldn’t keep it together. My daughter was the one with the hole in her heart,  but I felt like someone had just broken mine. I was sad, upset, and mad that my 3-month-old had to go through this. Why couldn’t it be me?? At work, I had to tell my boss and coworkers, all of whom had kids of their own, and they cried with me. At this point, I felt like I was going to throw up. I couldn’t eat. I just wanted to hold my baby.

I made the dreaded calls, first to my husband, then to my mom. I left work to be with my family and cried myself to sleep. I tried to keep it together in front of my kids, but I was sick to my stomach and on the verge of crying every minute of every day.

As more people found out, the first question they would ask was, “Did you know while you were pregnant?” I talked to the doctor regarding this and they said that the location of Gianna’s hole would not have been detected on an ultrasound. If by some chance it would’ve been, there was nothing that could’ve been done, and the course of treatment would’ve been the same. The only thing that would have changed was my stress level during pregnancy.

As people tried to offer their support by telling me stories about their kids, they ended up just making it worse. The most common thing people would tell me was either how their own child, or someone they know, have had multiple heart surgeries –But that wasn’t making me feel any better because we were told she would only need one.

I turned to friends who had babies that needed to have surgery, even if it wasn’t on their heart because they could relate to what we were going through. Thankfully, they were able to give me some awesome advice and the support we needed.

The day before we left for Gianna’s surgery, I had to explain to my 4-year-old son what was going to happen to his baby sister.

As I’m explaining this to him, he says, “Gianna’s heart is broken and the Dr. is going to glue it back together?” That’s right, buddy. So she’s going to be in the hospital for a little bit.

That night, he kissed his baby sister goodnight and said, “I love you, good luck.” I immediately started crying. My baby boy is truly the best big brother ever!

When we arrived at the hospital and got started on Gianna’s pre-opt workups, she was champ. She wasn’t crying at all, just smiling and laughing. As my husband and I fought back tears from seeing her strapped in an infant X-ray chair, we looked at her with the biggest smile, helping her to feel like she was on a roller coaster.

That night, we stayed close to the hospital and I cried myself to sleep, thinking that this was all a nightmare.

On the day of surgery, we met Gianna’s surgeon and he reassured us that this was one of the easiest procedures he was going to perform that day. I listened to every word he said. He comforted us by saying that on a scale of 1-to-10, where 10 is the hardest, this surgery would be a 2 for him and a 15 for us.

Before Gianna went into surgery, our parents were able to see her and of course, they were emotional. The time soon came to meet her anesthesiologist and they explained everything that was going to happen and what we could expect to see afterward. With Gianna’s grandparents crying and my husband crying, even the anesthesiologist had to fight back tears. But by that point, my body was already numb. I couldn’t cry. I couldn’t do anything but listen.

I sat in the waiting room, calm and numb, as my baby girl was on the operating table, without her mom, experiencing the scariest time of her life. Thankfully, I had so much support in the waiting room from my husband, my parents, my mother-in-law and her boyfriend, and my aunt and uncle, who all sat there with us and waited.

People called and texted for updates, and reassured me that Gianna was in great hands and that my son was with my sister, so I knew he was ok.

The surgeon said he would take about 4 hours to complete the procedure, but he had the hole patched in an hour and a half. They said the surgery went great and were able to take her off the ventilator right away. My baby girl is a fighter!

The time soon came for when we could see her in the ICU, and she looked good; lots of wire and tubes, but she was sleeping and moaning in her sleep. I just wanted to hold my baby, but I couldn’t. My sister brought my son so he could see that his baby sister was ok and that her heart had been repaired. Every day at the hospital got easier after that, and Gianna got released in 6 days instead of the usual 10. We have an amazing little warrior.

Now, 3 weeks after surgery, our baby girl is doing well. The echo showed that the hole is completely closed and we couldn’t be happier that our strong girl is going to be ok.

Today someone actually said, “She’ll never be able to wear a bikini.” Really? My 3-month-old just had open surgery! If she wants to rock her warrior scar when she’s older, she can. It’s something to be proud of!