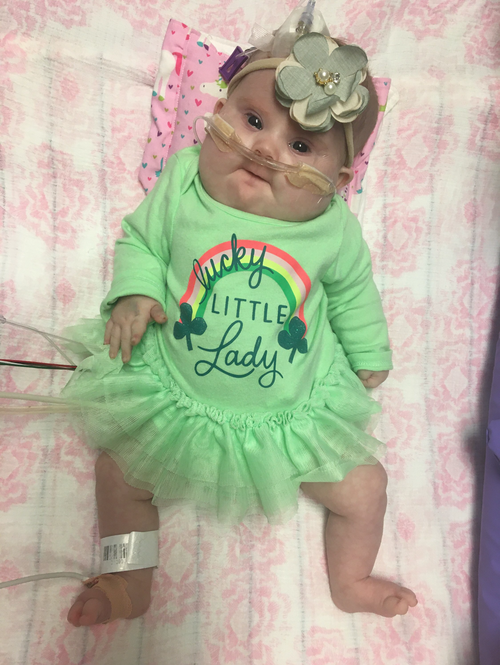 I remember going to the doctor’s office and the doctor telling us that my daughter had a small hole in her heart. The doctors said it was an AV canal defect and that it would be no big deal. The cause of the defect was my daughter having an extra chromosome.

It was in November of 2019 when my wife went in for her routine checkup at Duke University. The next thing I knew, we were rushing to the hospital because my wife was having small contractions that were putting stress on my baby’s heart.

Aven Elizabeth Murphy made her grand entrance at 33 weeks, weighing 3.2 lbs. She was in the one percentile of growth for her age, and only measured 15 inches long.

Aven was born with a heart defect as well as Down Syndrome, but she was the most beautiful thing I ever laid my eyes on. Aven spent four months at Duke University Hospital due to her defect. Aven was getting ready to go home when she began having trouble keeping her o2 stats up. A cath lab was done which discovered that Aven had severe Pulmonary Hypertension. The predicament was that Aven was too small for surgery, and her numbers were also too high. The plan was to put Aven on breathing support for a while to allow her to grow so the numbers would improve and she could have her operation.

I had her baptized the day before. Aven was the sweetest baby anyone of us had ever been around. She had a glow that almost made her seem unreal, or like an angel.

My hope for Aven’s short life is that she taught the doctors a lot about the condition, since she was such a rare case. If we possessed the technology to be able to operate on smaller hearts, or to control pulmonary hypertension more safely, Aven might have had a better chance at life. My faith in God has only grown, and Aven has given me a new purpose to advocate for our children with Down Syndrome and to also push for new treatments to help the next child.