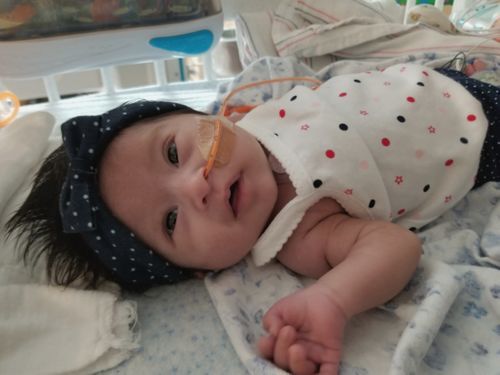 At our 22-week ultrasound, Ahriella was diagnosed with TOF + Pulmonary Atresia and Trisomy21. Our world was shattered. To say the remainder of my pregnancy was stressful would be an understatement. Doctors were preparing us for the worst.

Ahriella was born on May 15th, 2019. She was 4 weeks early and weighed 4lbs. Ahri was immediately taken to the NICU where she would stay until she stabilized. Being discharged from the hospital and my sweet girl staying behind was heart wrenching, every. single. day.

We expected her to need immediate heart surgery, however, we were able to wait almost a month until she had her heart catheterization on June 6th. She was even on our local news and Telemundo stations for being the smallest baby our hospital had done a catheterization on!

Ahri was surpassing expectations but still working on her feeding. We had gotten to the point where doctors said she could continue learning how to eat at home with an NG tube, which they would send home with us. We were preparing for our discharge from the NICU when our date got pulled because Ahri began desatting often.* She was transferred to Phoenix Children's Hospital to be evaluated and after a week there, they decided she was stable enough to go home.

After 65 long days, we happily said our goodbyes to the NICU. We are currently preparing for Ahri's permanent fix that will take place in September, but in the meantime, we are so thankful to have our sweet girl home. She has brought so much joy into our lives. I am so blessed and proud to be her mama.

If we can at some point prevent CHDs, of course that would be life-changing. Although there is a ton of support for heart families, no one should have to go through what I, and other families are going through.

*Desaturation: a decrease in the oxygen saturation level in the hemoglobin, making it difficult to breathe.