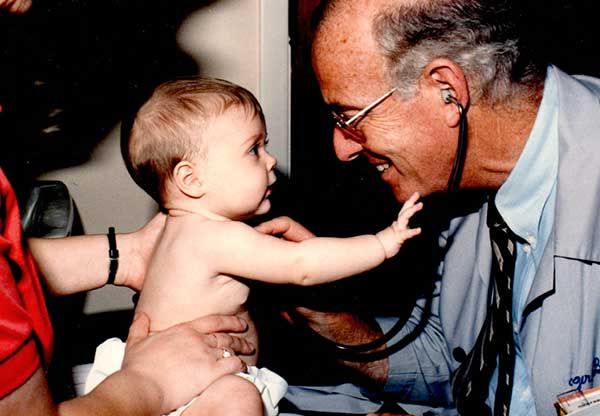 Through a gift from his family, the University of Cincinnati College of Medicine has established a nationwide award in memory of alumnus Roger B. Cole, ’57.

The Roger B. Cole, MD, Teaching Excellence Award in Pediatric Cardiology will be awarded to and financially support a UC College of Medicine graduate, faculty member, current/former fellow or resident who demonstrates excellence in teaching/training in the field of pediatric cardiology.

Dr. Cole’s wife, Ann Sherby Cole, was the driving force behind establishing the award. “Roger spoke often of how deeply he valued his medical education, which instilled in him a pragmatic and caring approach to patients and students, applied daily throughout his exemplary career,” Cole said. “Roger taught by example. He was humble and soft-spoken, but the power of his teaching was his focus beyond the science—his positive outlook of optimism and hope.”

After graduating from the UC College of Medicine in 1957, Dr. Cole completed his internship at Mt. Sinai Hospital in Cleveland, serving his residency first at San Francisco County Hospital on the Stanford Service and later at the Children's Convalescent Home in Palo Alto, California.

Following his time as a lieutenant in the U.S. Navy, Dr. Cole began a fellowship in the newly emerging field of pediatric cardiology at Chicago’s Children’s Memorial Hospital in 1962. He would go on to serve for more than four decades on the faculty of Northwestern University Medical School.

Dr. Cole spent the academic year 1972-73 on sabbatical in London, England with his family. He produced a monograph in collaboration with the British Medical Association, a continuing education course in pediatric cardiology for general practitioners.

Dr. Cole completed his career in private practice, during which time pediatric residents rushed to fill one of the 12 coveted slots in his practice for their elective rotation, learning from him beyond just the lecture hall—on hospital rounds and in his office examining rooms. He pioneered satellite clinics throughout Greater Chicago and Indiana to treat underserved communities.

During Dr. Cole’s time in private practice, hospital residents voted him “Teacher of the Year” twice. He received The Children’s Heart Foundation’s Lifetime Achievement Award in 2016. Dr. Cole passed away in July 2017.

“We are honored to continue Dr. Cole’s legacy through this award at the College of Medicine,” said Richard Becker, MD, Mabel Stonehill Endowed Professor of Medicine and chief of the division of cardiovascular health and disease at UC. “As an academic medical institution, our core mission is in training the next generation of providers to deliver the best evidence-based, patient-focused care. Through this award, we look forward to recognizing exemplary physician teachers from UC and UC Health.”