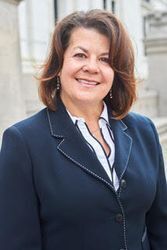 As a 1990 graduate of Miami University, earning a BS in Organizational Behavior in the Farmer School of Business, along with a minor in Economics, Tamara began her career with Bank One in Columbus, Ohio. Joining the Leadership Training team, she gained experience and excelled in her positions in retail, corporate banking, and business lending. In 1993, Tamara received her MBA in Finance from Capital University, and continued additional studies in Financial Planning, earning her Series 6 License. Tamara’s represented Youth For Understanding and Nissan with a scholarship as an exchange student to Japan. During college Tamara studied in London, England with the London School of Economics Tamara is a member of the YWCA Academy of Women of Achievement in Columbus, Ohio.

In 2007 Tamara, along with her husband Scott, joined the newly formed board of the Ohio Chapter of the Children’s Heart Foundation. CHF Ohio grew and Tammy become the Ohio Chapter President, and began serving on the National Board and Executive Committee in the Chapter Liaison capacity in 2010.  In 2014 she became the National Board President of CHF, guiding CHF through an Executive Board transition and creation of a new Strategic Plan for the organization after an 18 month planning process with a terrific team of volunteers. Tamara also works in her family business. Buckeye Automotive is an industry leader, as demonstrated by Buckeye Honda achieving its 20th President’s Award in 2022, in the top 1% of the automotive industry.