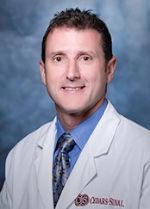 Evan Michael Zahn, MD, is a professor of Pediatrics  and Director of the Guerin Family Congenital Heart Program in the Smidt Heart Institute at Cedars-Sinai Medical Center. He performed his pediatric cardiology and interventional fellowships at The Hospital For Sick Children in Toronto under the tutelage of Lee Benson and Bob Freedom. In 1995 he began the interventional catheterization program at Miami Children’s Hospital where he ultimately became Chief of Cardiology and was instrumental in developing the Congenital Heart Program at neighboring Arnold Palmer Children’s Hospital in Orlando. Dr. Zahn is a distinguished researcher in congenital interventional cardiology and has participated as both a site and national P.I. in numerous device trials, which have which resulted in FDA approval of new devices for CHD patients in the United States. In 2007 he performed the world’s first transcatheter tricuspid valve implant and in 2018 the world’s first implant of the Altera pre-stent and Sapien 3. Other areas of focused exploration over his career have included: early post-operative intervention, development of hybrid procedures, the utility and feasibility of stents in small babies.  As national PI, he recently spearheaded  successful completion of the U.S. IDE trial of the Abbott Piccolo device for treatment of PDA in premature infants leading to the  first-ever approval of a transcatheter device for infants as small as 700 grams. He has published extensively on these subjects and has performed and participated as both an organizer, speaker and operator in numerous live cases and educational symposia around the world. He serves on several editorial boards, advisory boards and councils including the SCAI CHD Council. In addition to travelling abroad for speaking, proctoring and teaching, Dr Zahn is heavily involved in medical mission work providing interventional procedures for children in under privileged countries.